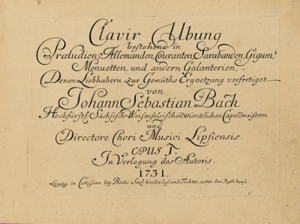 An extremely rare first edition copy of Bach’s Partitas for keyboard, or Clavier-Übung I (BWV 525-30), has sold at Sotheby’s in Paris. This example is one of only six known complete copies to have survived, as well as one of the finest to have been offered for sale in recent years. With the imprint of Rosine Dorothée, wife of Johann Gottfried Krugner, who provided the title page engraving, the present example sold for $369,611, exceeding the high valuation by more than fifty percent.

The current record for a Bach manuscript at auction was set in June this year, when a page from the performance materials for the cantata Ich liebe den Höchsten von ganzem Gemüte (BWV 174) sold for $544,856 at Christie’s in London.

Furthermore, one of twelve Bach portraits linked with Elias Gottlob Haussmann has recently sold for $122,500 at an old master paintings auction at Freeman’s in Philadelphia. “Is this a contemporaneous portrait, painted of the composer from life, as abundant scholarship, scientific evidence, and even a book suggest? The market has spoken. The smart money is betting it is,” the auction house said following the sale.