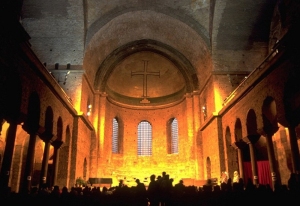 Hagia Eirene (St. Irene Church) stands on what is believed to be the oldest site of Christian worship in Istanbul. Roman Emperor Constantine I ordered the church in the fourth century, making it the first church built in Constantinople, and it is also the only church that was not turned into a mosque after the Ottomans conquered Istanbul in 1453. Eventually the Topkapi Palace walls enclosed the church, and the building was pressed into service as an armory and booty warehouse.

In the early twentieth century, the former church was transformed into a military museum, and now, under the control of the Turkish Ministry of Culture, the church’s original atrium, an apse containing five rows of built-in seats, and a great cross outlined in black against a gold background in the half-dome above the apse combine to create an extraordinary atmosphere for performances of western art music.