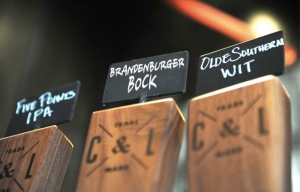 Betsy Gwinn and Alex Tiedtke of the Bach Festival Society of Winter Park [FL] recently learned of a three-hundred-year-old letter Bach wrote to a friend proclaiming his love for a barrel of beer he had received as a gift. So, to help celebrate the festival’s eightieth anniversary, Gwinn and Tiedtke approached Cask & Larder head brewers Larry Foor and Garrett Ward to see if they could brew a bock beer similar to the one with which Bach was so smitten.

The happy result: Brandenburger Bock, a unique and harmonious collaboration that pays homage to the master composer and beer lover.

Cask & Larder will tap the special brew at 3pm on Saturday, 7 February 2015. But it gets even better: members of the Bach Festival Choir will be on hand to serenade the crowd with traditional German beer hall songs. The party is scheduled to last until 6pm and will feature happy hour prices on the special release.

The Brandenburger Bock release party will feature a special German-themed food menu to pair with $3 pints. The limited-edition beer will be sold in to-go “crowler cans” and will be available on tap at Cask & Larder until it runs out.