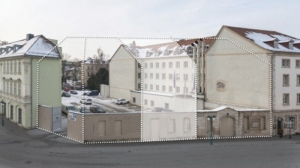 Up to the present day, the life and work of Johann Sebastian Bach has not received the appropriate acclaim within the cosmos of great spirits that frequented the European Cultural City of Weimar.

This fixed star in the world cultural sky lived and worked for ten years in Weimar. Here, at the Weimar Market Square, principal parts of his oeuvre were composed: a large part of Bach’s organ works, over thirty cantatas, parts of the Brandenburg Concertos [BWV 1046-51] as well as numerous solo works for violin and harpsichord including the Chromatic Fantasia and Fugue [BWV 903]. This is where the two most famous Bach sons, Wilhelm Friedemann and Carl Philipp Emanuel were born. According to the renowned Bach researcher Prof. Dr. Christoph Wolff, “after Leipzig, Weimar must be considered the second most important place in the composer’s life and work.”

The foundations of his home and the original Renaissance vaulted cellar have been preserved underground and placed under heritage protection – but are yet still inaccessible. This is the only at least partially existing and, among all the Bach cities, the only location proven by records to have been a place where Johann Sebastian Bach composed and lived that has survived to the present day. In the former Bach House – as of 1805 part of the Hotel Zum Erbprinzen – musical celebrities such as Richard Wagner and Franz Liszt, Felix Mendelssohn Bartholdy, Johannes Brahms, Gustav Mahler and Niccolo Paganini, but also the intellectuals Leo Tolstoi, Henrik Ibsen, Gerhart Hauptmann and Sigmund Freud and the politicians Napoleon Bonaparte, King Ludwig I of Bavaria, Gustav Stresemann, Konrad Adenauer as well as over one hundred additional well-known European figures lodged and/or gathered here.

In the meantime, for the past twenty-four years, this location – in the center of the World Culture City of Weimar and in the midst of UNESCO World Heritage – has been being used as a car park.

In the year 2006, the association Bach in Weimar was founded, and with prominent supporters that include two Nobel Prize-winners, it pursues the objective of building a musical Bach meeting-place above with preserved vaulted cellar and foundations of the residence: a “Bach House Weimar.”

So far, however, the realization has been stifled by the passive resistance of the property owners and the lack of active support by the City of Weimar and the Free State of Thuringia. In spite of many discussions with the responsible parties, there has been no concrete change to the location so far. That is why we are using all democratic means to progress this important project after years of stagnation and hope to be successful.

The area necessary for a Bach House would encompass only 15% of the 2,200m² of the car park lot. The financing has been largely secured, thanks to financially strong supporters. Even though we respect the justified economic interests of the owners in respect to this central location, we are no longer able or willing to accept the stagnation of this unique location that has now gone on for over twenty years.

Therefore, we have two urgent requests:

1.
Please act in our interest!

Please actively engage your efforts to encourage the owners to effectively discuss the realization of a Bach House Weimar with the Bach in Weimar Association and its supporters. The objective of the discussions should be to agree on the basis to allow a (partial) sale of the property, a lease, a building lease, etc. in the near future and to realize development perspectives. That is the prerequisite necessary to begin concrete planning and subsequently make it possible to build the Bach House Weimar at this location – on a small part of the lot. Of course this could also be harmoniously integrated into a complete building project on the property or into a re-constructed Hotel Zum Erbprinzen.

With the authority of your office, communicate your wish to have this renowned place adequately reconstructed, as the City Council’s resolution has already stated.

Remind the owner of his responsibility and please support us in convincing him of the reasonableness of Article 14 GG (Constitutional Law of the Federal Republic of Germany): “Property is a commitment. Its use is to serve the good of the general public.”

2.
We cordially invite you to Weimar:

The Bach City of Weimar will be the focal point of international public cultural interest on the occasion of this year’s Bachfest Weimar from 30 April until 4 May 2014. The occasion is the three-hundredth birthday of Johann Sebastian’s son Carl Philipp Emanuel Bach. He was born right here, in the Bach House in Weimar. As it happens now, day after day, tourists from all over the world will then also stand in front of the wall and the car park at the Weimar Market Square and ask the astonished question: “Why isn’t the Bach House here?”

We will use this historical occasion to resolve the stagnating situation after so many years.

By progressing the Bach House project at this time, we have the chance to help the Cultural Capital City become more attractive and gain worldwide attention – not lastly in the context of the Thuringian Theme Year “UNESCO World Heritage” in 2014.

Come to the Bachfest Weimar in May 2014 to lay the “idealized cornerstone” for this singular cultural project and during a special event or rally and give your guarantee to the attending guests that you will actively support this important matter of national and international cultural interest.

We look forward to welcoming you here.