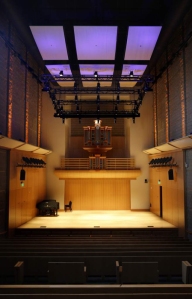 Superstars were out in force Saturday evening, 23 August 2014, to open the new Schroeder Hall at the Green Music Center [in Rohnert Park, CA] with an organ recital, one of a series of showcase events on the new music hall’s first day. The recital was preceded by Santa Rosa pianist Jeffrey Kahane playing Beethoven and Chopin and followed by pianist David Benoit’s tribute to Charlie Brown.

The first superstar was the organ itself, a Baroque-style tracker organ – meaning the pipes’ valves are opened and closed by mechanical pushrods connected to the keys of the keyboards – built by famed organ builder John Brombaugh in 1972. It’s considered a masterpiece of organ building.

The second was James David Christie, world renowned as one of the finest organists of his generation. He’s the organist of the Boston Symphony Orchestra and has won numerous international prizes for his playing.

The group of composers who wrote the program’s music were all superstars as well. Georg Böhm (1661-1733) wrote the oceanic Preludium in C Major. A piece by an anonymous Dutch composer from the sixteenth century was like a walk through a spring meadow. Jan Sweelinck (1562-1621) wrote the mystical polyphony of his Ricercar that turned from empyreal to earthily playful at the end. Johann Buttstett (1666-1727) wrote a Fugue in E minor that shimmered like images in a hall of mirrors. Dieterich Buxtehude (1637-1707), one of Johann Sebastian Bach’s teachers, was at his ponderous and stormy best, while Bach’s second cousin, Johann Bernhard Bach (1676-1749), wrote the Ciaconna in B-flat Major that beautifully showed off the organ’s various possibilities.

Christie finished the concert with that old warhorse, Johann Sebastian Bach’s Toccata and Fugue in D minor (BWV 565). He notched up the tempo, played it with enormous verve, and showed that it doesn’t have to be Halloween music.

The final superstar was Schroeder Hall itself, an acoustically perfect space for the world class organ. Christie chose these pieces to showcase the instrument, turning its pipes and stops and timbres like jewels reflecting sunlight. He got a well-deserved standing ovation, and the most common word heard among the crowd, as it filed out, was, “Wow!”

At a media event on the previous Monday, Christie said that the Brombaugh Opus 9 organ, with its 1,248 handmade pipes and all-wood cases, is not only a beautiful musical instrument, it’s historically important, too. When Brombaugh built it in 1972 for a Baptist Church in Toledo, Ohio, he designed it to replicate the clear voice of the great Baroque organs of northern Europe rather than the neo-Baroque style that was in vogue in the 1960s and 1970s and was common in church organs of the time. “It launched a reawakening of interest in that earlier construction,” Christie said.

Interestingly, Christie mentioned that when the Brombaugh Opus 9 was installed in Toledo, he was eighteen, traveled there to hear it, and had a chance to play it, so this world-famous organist and this instrument came full circle at Schroeder Hall’s inaugural recital.

Among others, the hall was funded by Jean Schulz, the widow of Peanuts creator Charles M. Schulz. The Santa Rosa cartoonist’s characters included Schroeder, a tow-headed kid who loved playing Beethoven on his toy piano. The foyer of Schroeder Hall features many original cartoon panels featuring the young pianist at his keyboard. The Brombaugh organ was donated by B. J. and Bebe Cassin. Mr. Cassin is a Bay Area venture capitalist who invested early in many of the high-tech businesses that now rule Silicon Valley.

The Opus 9 sits high on its own balcony above the stage. The ceiling is high and vaulted, and the sound flows over the seats to the rear of the hall, which is curved like half of a cylinder. This allows the sound to refocus itself over the seating, adding rich texture and reverberation to the organ’s clarity of line. The walls leading from front to rear hold hardwood chests containing velour panels attached to rollers. Motors allow the panels to be pulled out or tucked away to “tune” the hall to the sounds of instruments, whether organ, piano, brass choir, voice, or chamber ensemble. The entire hall is an instrument and part of the action.

Some of the most savvy designers in the country took part in the planning of the $9.5 million recital chamber. The architecture was designed by BAR Architects of San Francisco, with acoustical expertise by Kirkegaard Associates of Chicago and theatrical consulting by Auerbach Pollock Friedlander of San Francisco. Structural and civil engineering were by Santa Rosa firms.