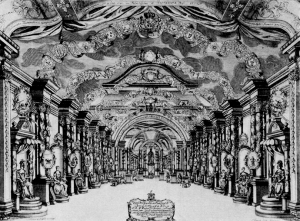 A scene at the Oper am Gänsemarkt

Born in 1683, two years before J. S. Bach, to a family of Kirchberg clothmakers, Christoph Graupner displayed an unusual facility for sight-singing at a young age. His uncle, organist Nikolaus Küster, provided Graupner his early musical training and convinced the boy’s parents that he should accompany him to his new post in Reichenbach, also in Saxony, for further education. Graupner was admitted to the St. Thomas School in Leipzig in 1696, long before Bach’s arrival, studied under Johann Kuhnau and collaborated with Telemann, and, upon exmatriculation in 1704, began to study law at the University of Leipzig.

The invasion of Saxony by Swedish troops in 1706 cut short his advanced studies and forced Graupner to flee to Hamburg where he found safety in a position as harpsichordist in an opera orchestra where Handel was a violinist. Between 1707 and 1709, Graupner composed five operas for the Oper am Gänsemarkt in an ecelctic musical style, combining French and German elements, that were well-received by the Hamburg audience.

Then, in 1709, Graupner’s life took another important turn when he accepted the position of Assistant Kapellmeister at the Landgraviate of Hesse-Darmstadt, rising to the top position in 1712. At first he focused on operatic composition at the Darmstadt Hofkapelle, at one point supervising some forty musicians, but after financial cutbacks in 1717, Graupner abandoned opera, cut the size of his staff and turned his attention to instrumental music and cantatas. Tempted, however, by the thought of returning to Saxony, Graupner competed for the position of cantor of the main churches in Leipzig that had opened up as the result of Kuhnau’s death, but when the Landgrave raised his pay and gave him other incentives to remain in Darmstadt, Graupner turned down the position that Bach finally accepted in 1723.

Now firmly entrenched in Hesse, Graupner composed more than one hundred “symphonies” (three-movement sinfonias or multi-movement dance suites in major keys), half as many concertos (mainly for woodwinds, half in the three-movement Vivaldi pattern and the others in four movements), and a sizable number of chamber works and keyboard suites that fused French and Italian styles. Highly regarded as a harpsichordist and for his accurate, elegant copies of the scores of other popular composers of the day, Graupner composed more than 1,400 Lutheran church cantatas, many of which reflect an awareness of compositional innovations originating elsewhere.

As with Bach, blindness ended Graupner’s career, but Graupner outlived Bach by a decade, dying in Darmstadt in 1760. 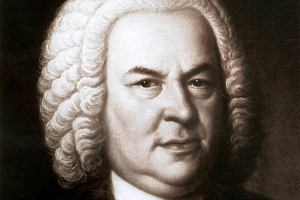 Among medical mysteries involving master musicians, it doesn’t quite match the still-mysterious death of Mozart at age thirty-five. But precisely why Johann Sebastian Bach went totally blind less than four months before his death in 1750 remains an open question, as well as the portal to a poignant story.

More than two-and-a-half centuries after the fact, a prominent Finnish ophthalmologist is offering what he calls a “plausible diagnosis” of the great composer: intractable secondary glaucoma, brought on by a botched eye operation.

In a paper published in the journal Acta Ophthalmologica, Ahti Tarkkanen outlines the medical and historical information that led him to this conclusion. He also notes that Bach’s life might literally have been brighter, and perhaps even longer, if he had lived, or even traveled, about five hundred miles to the west.

Tarkkanen, professor emeritus of ophthalmology at the University of Helsinki and director emeritus of the Helsinki University Eye Hospital, notes that after Bach’s eyesight began to decline, he had both eyes operated on by traveling British eye surgeon John Taylor. Tarkkanen puts the word “surgeon” in quotes, which gives you some idea of his lack of respect for this particular practitioner.

Daniel Elbert, the author of Men of Vision, a history of ophthalmology, calls Taylor “the poster child for eighteenth century quackery,” noting that he “practiced in the most flamboyant way, drawing crowds to watch procedures in the town square, and then getting out of town before the patients took their bandages off.”

The records of Bach’s care are inexact, but we know that Taylor operated on one or both of his eyes during the final days of March 1750. At least one (and possibly both) had to be operated on again one week later, due to the reappearance of the cataract. This second operation left Bach totally blind.

Taylor performed a “couching,” which is the oldest (dating from 2000 B.C.) and crudest form of cataract surgery. Still in use in some parts of Africa and India, it involves dislocating the cataract lens with a sharp or blunt instrument, and pushing it back into the posterior chamber of the eye.

Tarkkanen points to a 2009 study from Sudan that examined the ultimate outcome of sixty contemporary couching patients. It found sixty percent of them were totally blind, due to glaucoma.

He strongly suspects the father of Western music suffered the same fate. “Because Bach was blind after the second operation, and suffered from immense pain of the eyes and the body, the symptoms could be compatible with acute secondary glaucoma,” he writes.

Tarkkanen does not see an obvious cause-and-effect relationship between the operations and Bach’s death on 28 July 1750, at age sixty-five. But in a 2005 paper examining this same subject (which Tarrkanen draws from), physician Richard Zegers notes that “the operations, bloodlettings, and/or purgatives would have weakened him and predisposed him to new infections.”

Indeed, Taylor’s postoperative regimen reads more like torture than therapy. It included the use of “eye drops of blood from slaughtered pigeons, pulverized sugar or baked salt,” Zegers writes. “In the case of serious inflammation, Taylor prescribed large doses of mercury.”

Tragically, a more modern method was being tested in the nation next door. In 1747 – three years before Bach’s operation – Paris-based ophthalmologist Jacques Daviel conducted the first cataract operation using a new, safer, more effective method. His “extracapsular technique” would soon become the standard procedure for cataract operations, and remain so until the early twentieth century.

But it was too late for Bach, or for the other great composer of that era, George Frederick Handel. In 1751, he, too, underwent Taylor’s crude cataract surgery and, like Bach, was left blind.