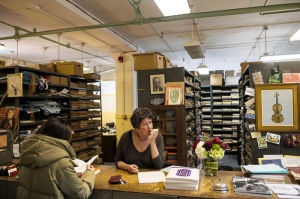 Frank Music Company has supplied classical sheet music to generations of instrumentalists, singers and composers. On Friday, 6 March 2015, the retail store will close its doors for good, succumbing to dwindling sales.

Frank Music has been struggling for years, as music became readily available online, said Heidi Rogers, the shop’s owner. “We went from seeing fifteen to twenty people per day to seeing two or three,” Ms. Rogers said on Monday. “I went from feeling like I was at the center of the world to feeling invisible.” The store, on West 54th Street between Broadway and Eighth Avenue, opened in 1937 and provided the city’s musicians scores from the standard – Bach, Beethoven – to the arcane. Ms. Rogers bought it in 1978.

Frank Music is the last store in the city dedicated to selling classical sheet music, Ms. Rogers said, although other places such as the Juilliard School’s bookstore at Lincoln Center have it on their shelves.

Frank Music’s stock, which Ms. Rogers counts as hundreds of thousands of scores, was purchased by an anonymous donor as a gift for the Colburn School, a music conservatory in Los Angeles. The school and Ms. Rogers declined to comment on financial details. Colburn School’s president and chief executive, Sel Kardan, called Frank Music’s scores “an invaluable resource for our students and faculty for years to come.”

To the sixty-three-year-old Ms. Rogers, nothing is more important than the arts. “The idea that classical music is irrelevant is ridiculous,” she said, bemoaning the comparative salaries of tubists and stockbrokers. “People should be paid in terms of what they contribute to people’s well being.” The store’s celebrity clients over the years have included pianists Emanuel Ax and Jeremy Denk, violinist Pamela Frank and cellist David Finckel. One of Ms. Rogers’s favorite memories is a telephone call from the violinist Itzhak Perlman, asking for Kreisler scores.

The composer Bruce Adolphe, who is resident lecturer at the Chamber Music Society of Lincoln Center, described the store as a musical meeting ground. “Frank’s Music was not just a store but a crucible,” he said, “a nexus where musicians from Suzuki beginners and their parents, to Joshua Bell, or the Brentano’s Mark Steinberg, would meet by chance.” Its closing is perhaps the latest example of classical music’s changing brick-and-mortar businesses.

Musicians have plenty of online opportunities to buy sheet music, whether from Amazon.com, publishers or specialty websites such as Sheet Music Plus. The website IMSLP, a digital library of public-domain music, allows users to download scores for free. Some musicians with iPads have dispensed with pesky paper scores altogether.

For now, Ms. Rogers plans to pack up the rest of the store’s contents and then spend some time on her farm in the Catskills, where she has tenant farmers and fifty chickens. “Everyone says, ‘Aren’t you going to have a party?’ ” she said. “I feel like having a funeral.”