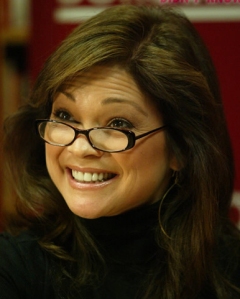 She’s hot in Cleveland – and even hotter on the concert podium. The television actress Valerie Bertinelli, 52, even as she continues to film her successful TV Land sitcom Hot in Cleveland (recently picked up for a fifth season), has been deepening her acquaintance with some of the most challenging repertory of the classical literature – as a conductor.

On 1 April 2013, the label CD Land (a TV Land affiliate) announced that it has signed Bertinelli to an exclusive recording contract (the news was leaked on Facebook slightly in advance of the announcement). Her first release will be Bach’s St. Matthew Passion (BWV 244), to be recorded later this year at an undisclosed location in New Jersey, and scheduled for release in 2014.

Casting has yet to be revealed, but there is behind-the-scenes speculation that the crossover-style performance will incorporate a solo role for the rocker Eddie van Halen, Bertinelli’s ex-husband and, she says, an abiding musical inspiration. Bertinelli will lead the Orchestra of St. Luke’s in an all-new arrangement of Bach’s score prepared by the composer John Williams, with the harpsichordist Mahan Esfahani acting as stylistic advisor to ensure the integrity of the project. In a special cameo, Bertinelli’s fellow-Hot in Cleveland cast member Betty White will sing the famous aria Erbarme dich.

“With this approach,” Bertinelli said in a statement, “I feel we will be able to present Bach’s music in an entirely new light.”

Bertinelli’s commitment to classical music has remained largely secret from her American fans. In Europe, however, the actress has been gaining attention for striking interpretations of some repertory staples, showing a stylistic breadth that stands in marked contrast to much of her acting career. “One of the most gripping readings of Shostakovich’s Leningrad Symphony that I personally know,” enthused one well-placed insider who commented on the condition of anonymity between him and more than two thousand Facebook “friends.” From soap opera to real opera: “Her Parsifal,” a Wagnerian remarks, “is second to none.”

Bertinelli came to conducting through a Czech reality show that was a precursor to the later BBC series Maestro, in which minor celebrities learn the nuts and bolts of conducting at the hands of a panel of professional musicians. Although she failed to make the top three – the victor was the tennis player Ivan Lendl – Bertinelli discovered a thereto-undreamed-of passion for classical music that led her to pursue studies at the Prague Conservatory in the late 1990s, a period during which her acting career seemed largely dormant. As a protege of the late Bohumil Gregor, she developed her expertise as a Janáček interpreter.

That she chose to remain silent about her increasingly consuming passion for music in her various volumes of memoirs, including her recent cookbook One Dish at a Time, was, she now says, partly an act of self-protection, although in fact music played an even more significant role than Jenny Craig in her stunning weight losses over the years. (“Boulez’s Pli selon pli,” the actress says, “is the ultimate workout tape.”) The decision to go public was not made lightly – nor was the decision to present herself as a crossover artist. According to sources, Bertinelli’s originally hoped to record Janáček’s The Excursions of Mr. Brouček to the Moon and to the Fifteenth Century, but label executives wanted to find music that might appeal to Bertinelli’s existing audience.

Bertinelli says her interpretation of the St. Matthew Passion was influenced by her experiences playing an angel on the CBS drama Touched by an Angel, which she now says helped her identify with the religious content of Bach’s masterwork.

No announcement has yet been made about Bertinelli’s second recording, but it will likely focus on female composers. In a 2010 interview with the Czech Music Quarterly, the actress mentioned her recent discovery in the Los Angeles Public Library of a forgotten orchestral song cycle by Cécile Chaminade from the early 1930s, written for MGM and thought to have been lost when the studio discarded its musical archives in the 1960; its rejection so scarred Chaminade that she largely abandoned composition in the last years of her life. It is entitled Poisson d’avril.