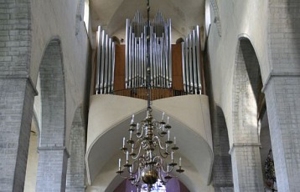 It is easy to forget that J. S. Bach wrote dance music. But three hundred years after much of it was composed, choreographer Mark Morris remembered. On a quiet, May, Massachusetts evening – sun setting – Yo-Yo Ma joined Morris’ dance company for a rehearsal of Falling down Stairs. This choreography sees a cast dancing to the third of Bach’s Suites for Solo Violoncello (BWV 1009). The concluding seconds were unlike any the audience had experienced; it elicited a universal and audible intake of breath. As the final chord compressed and released, the most aerodynamic of Morris’ troupe sprinted, taking off from the stage’s stairs, suspended, and landed in the arms of her ensemble. Although the audience of musicians, composers, and conductors was well versed in the music, Bach – Classical music’s staple of three centuries – became an overpowering force that united even our respiratory systems.

There’s something universal and humbling about Bach’s music. It usurps its time and place and articulately speaks to listeners everywhere. Not only do aspiring musicians worldwide share in their experiences toiling over Bach, it brings together even the most unsuspecting. For instance, composers of new classical music – a fickle bunch – subscribe to the most diverse trends. Although they don’t agree on much, most accept the brilliance not necessarily of Beethoven, Mozart, or Brahms, but of Bach. In 2008, Deutsche Grammophon with German violinist Anne-Sophie Mutter released two of Bach’s violin concertos [BWV 1041 and 1042] alongside the world premiere of Sofia Gubaidulina’s In tempus praesens. In a promotional interview, the aging Russian composer was especially animated when she described the technical and emotional importance of Bach’s music on her own: “I’m not satisfied when I listen to pieces written solely from intuition . . . but I’m very satisfied when I listen to pieces by Bach that contain both those mathematical principals and the fiery current of intuition.”

This is what’s most compelling about Bach’s music – its simultaneous scope and humility. Composers of the Western tradition are usually associated with a specific genre of achievement, but Bach’s genius lay in his balance between two – structural integrity and artistic beauty; “mathematical principals and fiery current of intuition.” Many processes and forms in classical music are hugely impressive, but few also communicate with the same emotional capacity as Bach’s. For example, his Well-Tempered Clavier (BWV 846-93), a set of forty-eight keyboard pieces, not only shows unprecedented structural brilliance – it went so far as to codify the tuning system that composers would use for the next three hundred years – it also displays nearly unparalleled beauty of character.

Although Bach’s music receives myriad performances, it can be difficult to know what to expect at any given concert. Igor Stravinsky described French composer Maurice Ravel as the “Swiss watch-maker of music,” referring to Ravel’s painstaking attention to detail in this score. He considered every nuance in this music. Ravel wrote his only string quartet in 1903, and its score places precise limits and controls on the musicians. Although this comes as no deterrent to an audience or musicians, it does mean the quartet’s range of interpretations is limited. But Bach’s scores lie on the opposite end of this spectrum. Because relatively few parameters are defined in his scores, musicians who perform them are given nearly unparalleled artistic license to shape and mold the music as they see fit. This means the range of interpretations of Bach’s music is vast. Where you might find similar interpretations of Ravel, it’s much harder to find two performances alike of Bach.

New Year is a time of congregation, reflecting on the past, and reckoning with the future. In broad terms Bach’s music reflects these ideas – so it’s fitting that II Tallinn Bach Music Festival rings in this New Year [in Estonia]. From 1 through 7 January 2013, the festival has grown out of an organ series at St. Nicholas Church to include a range of instrumental and choral repertoire. Although Bach’s music is grounded in the past, it’s also infinitely forward thinking. It is a potent medium of congregation, too (perhaps Morris’ Falling down Stairs is the best example that combines all three). If wary of the prospect of another performance of Bach, reconsider the music’s habit of bringing people together, its profound malleability – how it’s continuously reinvented, and its capacity to communicate universally. Bach’s music has acted as a podium from which audiences, musicians, and composers have consistently inspected the past, internalized the present, and looked to the future.