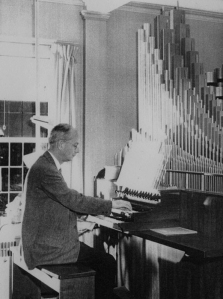 William H. Scheide, the Princeton philanthropist and Bach enthusiast who made significant contributions to scholarship in various fields of study and curated one of the largest rare book and manuscript collections in the world, died early on 14 November 2014, a source close to the family confirmed. He was one hundred years old.

Born in Philadelphia on 6 January 1914, Bill was the only child of John Hinsdale Scheide and Harriet Hurd. His parents were passionate about music, culture, rare books and human rights. His father played the piano, and his mother, a social worker, sang. At age six, Scheide began piano lessons. He later learned to play the organ and the oboe.

A 1936 graduate of Princeton University, Scheide majored in history because there was no music department at the school at the time. He wrote music criticism for The Daily Princetonian and enjoyed attending concerts in Philadelphia and New York. His senior thesis, “Adaptations of Christianity to Chinese Culture,” explored the pervasive Christian influences Jesuit missionaries brought into Chinese culture centuries earlier.

Scheide earned his master’s degree from Columbia University in 1940. His graduate thesis explored what happened to Bach’s music in the first century after his death.   Known as one of the most famous Bach enthusiasts in the music world, he was the first American published in the Bach-Jahrbuch, one of the world’s most respected Bach literary periodicals.

He taught at Cornell University for two years and played the oboe with a group of amateur musicians who performed an all-Bach repertory. He founded the Bach Aria Group in 1946 and served as its director until 1980. For more than three decades, the group enjoyed international acclaim for its concerts, broadcasts, and recordings. Scheide also helped fund the reconstruction of the Woolworth Music Center at Princeton University and endowed a professorship of music history at the school.

Scheide also expanded the rare book and manuscript collection begun by his grandfather and enlarged by his father. The Scheide Library is housed within Firestone Library at Princeton University. Scheide completed their collection of the first four printed editions of the Bible in 2002. Other items in the collection included musical manuscripts by Bach and other famous composers, a fourteenth-century Magna Carta, a first edition of Milton’s Paradise Lost, and letters by Christopher Columbus. On his ninetieth birthday, Scheide announced that he would bequeath his rare book collection to Princeton University upon his death. He donated rare books to several other academic institutions, including Princeton Theological Seminary and Westminster Choir College.

Throughout his life, Scheide used his inherited fortune to support a variety of philanthropic causes, including civil rights issues. He was the chief funder of the landmark 1954 lawsuit Brown v. Board of Education that ended public school segregation. For more than five decades, he played a crucial and invaluable part in advancing the goals of The NAACP Legal Defense and Educational Fund. He was a member of the NAACP’s national committee and was a principal funder of the organization. He donated around $200,000 to hire poll-watchers on the lookout for race discrimination at the Florida polls in 2008. He was also a major supporter of Centurion Ministries, the Princeton-based nonprofit that works to free the innocent from prison.