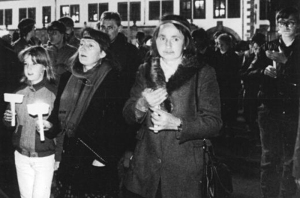 A peaceful demonstration in Leipzig, 1989

Travelers to Germany in 2014, especially to Berlin, Dresden and Leipzig, may encounter a variety of celebrations honoring the twenty-fifth anniversary of the Peaceful Revolution, the fall of the Berlin Wall and the path toward reunification of the country. From 9 through 12 October 2014 the “Festival of Lights” will be a highlight in Leipzig, but it is the story behind the festival that must be told.

Many European cities have grand musical traditions. Leipzig is no exception for it is the city of Johann Sebastian Bach. Bach was choirmaster at the historic St. Thomas Church for twenty-seven years. Even without his considerable influence, the church would have had a rich legacy, but Bach’s reputation made it even more notable.

It was at St. Thomas Church, in 1539, that Martin Luther introduced the Reformation to Leipzig. Some two hundred fifty years later, in 1789, Mozart played the church organ there, and in centuries that followed both Felix Mendelssohn and Richard Wagner also performed at the church.

The church choir has been in existence since 1254. During Bach’s time there were fifty-four singers in the chorale. Today the world famous St. Thomas Boys Choir features the voices of eighty boys singing music particularly dedicated to Bach in weekly performances of motets and cantatas during regular Sunday services.

Bach was also choirmaster at St. Nicholas Church from 1723 to 1750. St. Nicholas is nearly a hundred years older than St. Thomas, dating to 1165, and when it was built, St. Nicholas Church was situated at the intersection of two important north-south, east-west trade routes which not only played an important role in Leipzig’s past, but it was also critical to the events that reunited Germany in 1989.

Each November during the early 1980s, young people from all over the region would gather at St. Nicholas Church for ten days of prayer for peace. There had been large demonstrations all over the German Democratic Republic protesting the arms race in those days, but the gatherings in Leipzig were regarded as little more than non-violent prayer vigils. The only places where issues could be openly discussed in Germany were at meetings held in churches, and St. Nicholas was one of those sites.

Soon a youth group from the church decided to increase the meetings by having prayer services every Monday evening. At first there were only a handful of attendees, but before long more people came to demand justice and respect for human rights. Many who participated were non-Christians, but, with no other place to gather, they regularly attended the meetings. They studied the words of the Old Testament and the Sermon on the Mount, and eventually they came to understood two things: that people should discuss urgent problems with each other and that they also needed to meditate and pray to God for support and guidance.

Slowly the movement gathered strength. Each day the church was decorated with flowers. Each night it was filled with the light of hundreds of glowing candles. After a while the government took notice and became concerned. From May of 1989 all access roads to Nicholas Church were blocked by police checkpoints.

Authorities exerted pressure to cancel the peace gatherings, but the prayers continued. Monday after Monday the meetings were held even though many were detained or arrested. Soon it became impossible for everyone to get into the church because the numbers were so great. Yet, still they came.

Early in October 1989, St. Nicholas Church was filled with more than two thousand people inside with thousands more out in the streets. When the prayers ended, the bishop gave his blessing and made an urgent appeal to the congregation for non-violence. As people departed the church, they were greeted by thousands of fellow East Germans standing in the square, standing with candles in their hands.

To carry a candle outdoors requires two hands. One holds the candle while the other prevents it from going out. In order to keep a candle burning it is not possible to carry a stick or a club or a stone.

It was a miracle. When police arrived and surrounded the crowd, they didn’t know what to do. They were bewildered and quickly lost their incentive to fight. For the protesters this was a peace vigil, and they were armed only with candles. Soon the police began mingling and talking with the people. Eventually they withdrew. As one officer said, “We were prepared for everything. Everything, that is, except candlelight.”

The non-violent peace movement lasted just a few weeks more before the government collapsed. Not long after, about two hours northeast of Leipzig, the notorious Berlin Wall went crumbling to the ground.