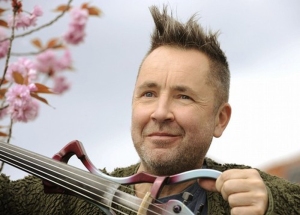 Nigel Kennedy, the enfant terrible of classical music, is always good for a quote. Try this from an interview last year with The Guardian newspaper after the interviewer pointed out that his concert will be conducted by a woman: “I really don’t see what’s so important about gender. I think conductors are completely over-rated anyway, because if you love music why not play it? . . . I don’t think the audience gives a shit about the conductor. Not unless they’ve been pumped full of propaganda from classical music writing or something . . . no one normal understands what the conductor does . . . they just wave their arms out of time.”

It’s a typical Kennedy rant – the sort of one-sided expletive-filled generalization we can perhaps dismiss as trash talk – or simply Kennedy being Kennedy. He might sometimes be wrong, or perverse, but he’s lovably wrong or irresponsible in the way of the naughty child.

And speaking of children, there is another great quote from comedian Bob Monkhouse who said: “Growing old is compulsory, growing up is optional.”

As Kennedy told an audience at a performance last year of music from his recent CD Recital, which blends Bach with Fats Waller and his own compositions: “All this repertoire is music which I have either grown up with, or feel I’ve grown up with, bearing in mind that growing up is something I haven’t been overly interested in so far.”

Perth fans of this violin virtuoso with the potty mouth, extreme opinions and arrested development will get the full flavor of his personality in an intimate recital on 29 April 2014. Kennedy will divide his concert into two distinct halves – the first half solo violin compositions by Bach. After interval he will introduce his four-piece combo of acoustic guitars, bass and drums playing his own compositions and jazz improvisations.

For some reason I’ve got it into my head that his Australian tour will feature music from Fats Waller, recorded on his CD Recital. “Nuh, man, Fats is not on the list, although Fats might find his way in there at the end,” he says on the phone from London.

Of the Bach violin compositions, Kennedy says: “I love the geezer, man. I’ll be playing his Chaconne in D minor (BWV 1004), a set of variations which are just phenomenal.” (It’s been praised as one of the greatest pieces of music ever written). And on his own music, Kennedy searches for a comparison: “It’s intimate stuff with acoustic guitars and the drummer just on the brushes, very quiet really: somewhere between the Modern Jazz Quartet and Fairport Convention.”

Kennedy is one of the few classically-trained musician who feels comfortable playing jazz, particularly that distinctive sense of freedom that comes from improvisation. In his youth he played on stage with the great jazz violinist and improviser Stéphane Grappelli and he has created music in homage to the equally celebrated rock guitar improviser Jimi Hendrix.

He might buy an argument with classical musicians over that one, but Kennedy is never far from controversy over his views. Even his off-hand remarks are likely to get him into trouble.

Take the controversy that erupted at last year’s Proms concert, where Kennedy played with a group of Palestinian musicians. At the end of the performance, Kennedy told the Albert Hall audience: “We all know from experiencing this night of music that giving equality and getting rid of apartheid means there is a chance for amazing things to happen.” His apartheid comments were interpreted as an attack on Israel’s policies towards the Palestinians and were edited out of the BBC’s television broadcast which went to air later. Kennedy furiously denounced the action as an attack on freedom of speech, a response lapped up by the British media.

In our phone interview Kennedy is more philosophical, saying he was only making a remark about how good it was to be able to play with Palestinians. “Then some baroness, who is not worthy of that name, got it into her head that my remark should be banned,” he says, clearly annoyed that the comment had gotten out of hand. (He is referring to a former governor of the BBC, Baroness Deech, who said Kennedy’s remarks were offensive and untrue and that there was no apartheid in Israel.)

But, really, should he have been surprised? Kennedy has spent a career developing a reputation for his “punk” attitudes to classical music, of debunking myths and being provocative about how he feels about music and life in general.