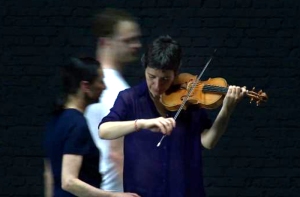 The lights dimmed as usual as the audience took its seats. Then they went out entirely. A light gleamed briefly as a door opened at the back of the stage, and a figure entered. Then it was as dark as tar again, and the first strains of Bach’s Partita in D minor (BWV 1004) sounded. For some twenty minutes, the violinist Amandine Beyer played, and the audience listened to the pure sound.

It wasn’t, however, a concert with newfangled staging ideas. It was Partita 2, a work by the choreographers Anne Teresa de Keersmaeker and Boris Charmatz (who would also appear onstage in the piece) that opened the eighteen-day Foreign Affairs festival [in Berlin] last month. “I like the way this undermined the expectations of a big opening,” said Matthias von Hartz, the festival’s director, looking a little weary the next morning after a party at the Haus der Berliner Festspiele that had run until 4am.

Foreign Affairs is a new contender on the summer cultural circuit in Europe, an unlikely entry at a time of draconian cuts in arts financing across the Continent. Its presence is owed to the existing structure of the Berliner Festspiele, a citywide yearlong series of seven festivals or seasons that encompass theater, music and literature as well as exhibitions at the Martin-Gropius-Bau art museum. “These festivals are a kind of interface between Germany and the world,” said Thomas Oberender, the director of the Berliner Festspiele, who appointed Mr. von Hartz to transform a season of theater and dance programming into a full-fledged festival when he was hired in 2012. “I think you have to acknowledge when a format must change. I don’t want to continue producing old-fashioned art. We’re a new generation. Let’s refashion other ways.”

The budget for the entire Berliner Festspiele, provided by the [German] federal government, is around $10 million, of which around $1.8 million is allocated to Foreign Affairs, Mr. Oberender said. And although Mr. von Hartz’s mandate is to present the performing arts in general, his interest in dance gives the field a new and major European platform. “We have a very strong state theater system in Germany, and dance is somewhere out there, not part of the serious system, which is theater and opera,” Mr. von Hartz said. “The politicians have heard that people move, but, you know, they can’t be sure. In fact, more interesting things are happening in dance than in international theater.”