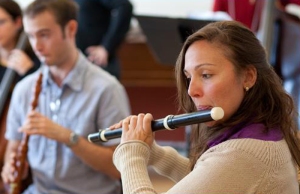 A couple of decades ago, there was one articulation for early music among modern players – short and staccato. I’m not exaggerating, and we all heard it. It meant just about every performance of early music by a modern orchestra would sound the same. The idea of considering the shape of a note in a radically different way from the way that they considered it in later repertories – well, it just didn’t happen. And for a while, in the late ’80s and ’90s, early music became sort of off limits for big orchestras; they just didn’t tackle it anymore. Now they’re back at it, and you have conductors who focus mostly on the standard rep who actually know a whole lot about this stuff.

“Players today are really motivated to learn this music,” says Jeffrey Thomas, artistic and music director of the American Bach Soloists’ Festival and Academy. “In this new generation, nothing is off limits to anyone, if they’re willing to excel at it. It’s gratifying to see such rejuvenation – not simply younger [players], but that there are more people interested in it, who see that it’s a valid way to spend their time.”

These young players approach this is with all the chops that they have to be able to tackle the most difficult twentieth-century repertoire, and they go at early music with the same attitude about its technical demands. They’re ready to work as hard to play it as their more-standard repertory. There’s remarkable industriousness in these young players: They want to do it all. And they can.

This change is part and parcel of the success of the early-music movement in revising and raising our expectations about what performances of Bach and his Baroque cohort can sound like.