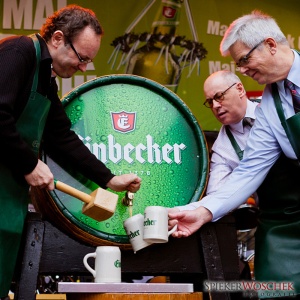 If you’re old enough to remember M*A*S*H, the classic TV show, you may remember the episode when Radar O’Reilly was trying to impress a sophisticated nurse who loved classical music. Hawkeye suggested he just keep using the phrase, “Ah, Bach.”

Of course, Johann Sebastian Bach is enough to impress anyone, from music lovers to horror movie fans, who have heard the opening notes of his Toccata and Fugue in D minor (BWV 565) in countless scarefests.

What does Bach have to do with beer? The two have always gone hand in hand – some of the Baroque composer’s clients actually paid him with beer. Now, two major music events are celebrating the connection. The Oakland East Bay Symphony is teaming up with Linden Street Brewery for a Bach & Brewfest on 17 May 2014 that includes music, Linden Street beer, and ales made by the brass and flute sections. And the Mendocino Music Festival is doing a Bachfest and Bach & Beer event this summer.

I’m thrilled on every level. Long before I became a beer writer, I was a composer and musician stationed in New York City with a U.S. Army band.

Playing an instrument requires technical precision and artistic creativity, the same skill set you need as a brewer. The best brewing is equal parts art and science, and brewers who make a consistent beer are fastidiously organized. Precision is integral, from the length of the boil to the exact moment to add hops and in what amount – the tempo, the time signature and the notes. It doesn’t surprise me that many brewers are also musicians and that many breweries have their own house band. The same type of person is drawn to both pursuits.

I will be speaking about beer and brewing in the time of Bach at Mendocino’s Bachfest on 13 July 2014. When they asked me what beer to serve, the punster in me immediately thought of bock. But the more I thought about it, the more sense it made. Bock is a type of German beer which originated in northern Germany as early as the fourteenth century and would have been popular during Bach’s lifetime, as it still is there today.

The name is believed to come from the town of Einbeck, where it likely was first brewed. The name evolved into bock in the seventeenth century, when brewers in Munich began brewing the style. Their Bavarian accents made “beck” sound like “bock,” the German word for goat, which explains why goats grace so many bock beer labels.

Bocks are lagers, meaning they use bottom-fermenting yeast. They need to be aged at colder temperatures than ales, and for a longer period of time, sometimes months. There are several types of bocks, but the traditional bock is probably the most common. It’s a little darker in color and a bit stronger than your average beer – usually between 6 and 7.5 percent alcohol by volume – and malty sweet.

Einbecker Ur-Bock Dunkel, which is imported here, is essentially the original, but you can find several other versions by German and American brewers here, too. Try Anchor Bock, which the San Francisco brewing company brewed for the last time this spring. Pick some up soon, before it’s gone for good.

Other common types of bocks include maibock and doppelbock. Maibock, which is also known as helles bock or blonde bock, is lighter in color – golden to light amber – but otherwise similar to a traditional bock. Try Gordon Biersch‘s Blonde Bock or Rogue‘s Dead Guy Ale.

Doppelbock, or double bock, is a bigger beer at 7 to 10 percent alcohol. It’s full-bodied and often sweeter, too. This style was originally brewed by monks to get them through the Lenten fast. The beer was known as “liquid bread” in the monastery. The original doppelbock was Paulaner‘s “Salvator,” and even today, the name of most doppelbocks end with the suffix “-ator.” I’m particularly fond of Ayinger‘s Celebrator, but Spaten Optimator and Samuel Adams‘ Double Bock are also quite tasty.

Drop in to one of the Bach events to enjoy delicious beer and equally wonderful music. Or pick up a beer and listen to some Bach at home. Bock and Bach make a uniquely delicious combination.