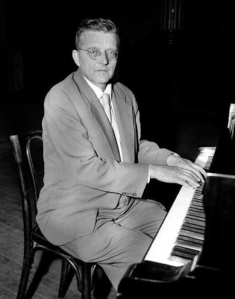 Music history is flush with moments on which we might have loved to eavesdrop. High on my list would be one night in 1958.

Oxford University was conferring an honorary doctorate on Dmitri Shostakovich, and the host for his visit was none other than Isaiah Berlin, the great political philosopher and historian of ideas. In a letter recounting the event, Berlin makes clear that Shostakovich left a deep impression on him, both in the composer’s physical bearing (“small, shy, like a chemist from Canada”) and in his state of constant nervous agitation (“a twitch play[ed] in his face almost perpetually – I have never seen anyone so frightened and crushed in all my life”).

As it turned out, the French composer Francis Poulenc also received an honorary doctorate the same year, and not long after the ceremony, both men attended a musical soirée in their honor. While Poulenc, ever the boulevardier, charmed the crowd, Shostakovich cowered in a corner of the room looking painfully awkward. His entire professional life had been marked by a game of cat and mouse with the Soviet regime, and he could hardly escape it when traveling abroad.

The gathering included live performances, and Berlin recalls a rendition of Poulenc’s Cello Sonata and a set of Poulenc songs being performed “in the ludicrous Victorian English fashion.” Shostakovich’s Cello Sonata was also played. Then there was a silence, and Shostakovich himself was invited to play something. The great man obediently took a seat at the piano without uttering a word. Berlin’s description of what happened next is difficult to forget.

Shostakovich played “with such magnificence, such depth and passion, the work itself was so marvelous, so serious and so original and unforgettable, that everything by Poulenc flew through the window and could not be recaptured,” Berlin writes. “Poulenc did play something from Les Biches and something else, but his music could not be listened to any more, the decadence of the Western world had alas become all too apparent.”

“While playing,” Berlin continues, “S.’s face really had become transformed, the shyness and the terror had gone, and a look of tremendous intensity and indeed inspiration appeared; I imagine that is how nineteenth-century composers may have looked like when they played. But I do not think it has been seen much in the Western world in the twentieth.”

The music Shostakovich played that night in Oxford was from his Twenty-four Preludes and Fugues, the magisterial keyboard cycle which receives a rare complete performance (by Alexander Melnikov) at the Gardner Museum. It is the largest and most expansive work the composer wrote for his own instrument. To say the cycle was inspired by Bach’s Well-Tempered Clavier (BWV 846-93), which it was, feels somehow insufficient. This is music listening to other music. The two cycles possess a kind of arcane pact of the spirit that goes beyond technical descriptions of their similarities and differences. There is here a profound beauty born of humility and restraint, a wedding of abstract contrapuntal rigor with deeply personal vision.

As happens so often with Shostakovich’s works, the Preludes and Fugues, begun in 1950, contain powerful traces of the cultural and biographic moment in which they were created, without being defined by those traces. It was a dark period for the composer, still recovering from the notorious Zhdanov Doctrine of 1948, in which his art was denounced for its “formalist” tendencies, his music banned, his teaching position stripped away.

Atoning for his musical sins entailed various ritualized public confessions, as well as new works that conformed to the doctrines of Socialist Realism. His 1949 choral piece Song of the Forests referred to Stalin as “the great gardener” and won him a State Stalin Prize. But as his public rehabilitation continued at pace through official works like these, Shostakovich was also writing works in a more private idiom. In 1950 he heard a young Russian pianist named Tatyana Nikolayeva play some of Bach’s preludes and fugues from The Well-Tempered Clavier in Leipzig and began writing his own a few months later, eventually traversing all of the major and minor keys.

The pieces, some barely two minutes in length, others much longer, flowed from his pen at a speed of one or two a week. After reporting on his new project to his confidante Isaak Glikman, Shostakovich added: “and so life goes on.” We sense relief in these words, just as Berlin read it on the composer’s face that night. The new keyboard works could serve as a stabilizing force, a source of inner sustenance for the composer during such harrowing times. By now we know better than to call this private music the composer’s only authentic voice, in contrast to his more public art. But these pieces, miniatures and pocket confessions, still carry the aura of an artist’s daily diary, the sound of a composer writing for no one but himself.

Perhaps partly for that very reason, the cycle’s first airing for colleagues and officials of the Union of Soviet Composers in 1951 did not go well. No doubt racked by nerves, Shostakovich is said to have performed the music poorly on this occasion. The cultural bureaucrats smelled blood in the water. The Preludes and Fugues, they pronounced, represented a kind of ideological backsliding, a return to the composer’s unhealthy tendencies. They attacked the music as morbid, gloomy, and intolerably pessimistic. Indeed, in the most perfectly Orwellian line from the official transcript of the proceedings, recounted in Mark Mazullo’s essential book on the cycle, we read that “images of tragic detachment or nervous exaltation, which dominate many of the pieces, in no way can be accepted as typical of the inner world of the Soviet citizen.”

And yet, this cycle still resists any attempt to pin it down exclusively to these dark circumstances, or to read too much into its fascinating web of quotations and allusions. The music keeps the ear engaged with its enormous surface diversity across the movements, from the simplicity and sweetness of the opening prelude to the searching quality, the wit and caricature in some of its central panels, to the massive climax of its final thundering Fugue in D minor.

Indeed, as with all of Shostakovich’s greatest works, the music exerts a kind of dialectical pull, drawing us back into his times while also somehow floating above them, beyond them. Here we also have the added resonance of the composer’s own dialogue with the musical past, and with the piano as his own instrument. This density of accumulated meanings is one key to the music’s self-enclosed richness, its perfect seal. Through it all we sense Bach’s music pulsing just out of view, like a homing signal in the void.