Breakdancers Flying Steps have returned to trafo/Kraftwerk, a decommissioned power plant in the Mitte section of Berlin, for two additional weeks of performances of Flying Bach, featuring the first six pairs of preludes and fugues from Bach’s The Well-Tempered Clavier Book I (BWV 846-851) and Toccata and Fugue in D minor (BWV 565).

As soon as I saw the Deutsche Welle video in September, I knew that I wanted to see Flying Bach when I got to Berlin in December, but it wasn’t until early November that I realized that tickets were sold out and that I would have to wait until I got to Berlin to get one.

Soon after arriving in Berlin and settling into my hosts’ flat in Prenzlauer Berg, I began an online search to find a ticket, but the asking prices for scalped tickets were so high that I decided to show up at the door every night, starting 7 December, until I got lucky.

So that Wednesday I made up a sign in what I imagined was colloquial Denglisch (“suche 1 Ticket”) rather than proper German (“Eine Eintrittskarte wird erwünscht”) and headed out in the rain to the U-Bahn station at Senefelder Platz. Four stops later, after passing below Alexanderplatz, I emerged from the Märkisches Museum station and began walking east, looking all around me for any sign of trafo/Kraftwerk. Well, that certainly proved to be no problem as the former power plant’s 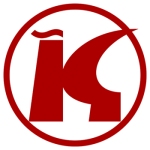 huge smokestacks were brightly illuminated, and it crossed my mind if they’d been bathed in red light, rather than blue, they might have inspired the logo for the Konsumgenossenschaft, one of the few outlets for consumer goods in the former German Democratic Republic, that featured a “K” fashioned from a smokestack and a sickle.

Anyway, the crowd was already lining up at 6:30pm because there was no assigned seating and the doors were going to open at 7:00pm for an 8:00pm show. I entered the gate controlling access to the small parking lot, walked to the front of the line, saw that no-one was offering tickets, and realized that my best bet was to return to the gate and stand there emotionlessly with my very powerful sign.

But before I could even get the sign out of my pocket, a man arrived at the gate and asked if I could use an unneeded ticket. I was immediately overcome with a rush of relief as I realized that I was not only going to get to see Flying Bach that very night, but I was also going to be able to pull off my ideal schedule for the remainder of the week.

So, it turns out that this guy’s girlfriend had bought a pair of tickets, but she’d fallen ill and couldn’t go and made him promise that he’d go without her and he’d better “have a good time anyway, dammit.” Well, “Dirk” really had no idea who the Flying Steps were and had, after all, expected his girlfriend to tell him what was going on, so I was happy to step forward and offer to serve as his guide to Bach and whatever else was happening.

Not that I knew anything about hip-hop or breakdancing (Where are my sons when I need them?), but I hoped that I’d watched at least enough YouTube and read enough Wikipedia to not be entirely clueless about the urban arts. However, that really never became an issue it was the scene inside the old industrial building that I, a habitué of formal concerts, was totally unprepared for.

As soon as the doors were opened, the crowd began to surge behind us, and we found ourselves scrambling up fantastic staircases as painted scenes from the Flying Bach tour flashed by. We climbed up and up without stopping, the air warming as we got higher and higher, crazy beams and columns grabbed at us from every side, overhead rolling cranes threatened our scalps, until we finally reached a peaceful cross aisle separating banks of audience seating. We grabbed two seats at the end of the last row at the top of the first seating section and immediately realized that our sightlines to the performance platform were going to be perfect.

A Bösendorfer Imperial Grand stretched across the left side of the stage, a two-manualed harpsichord stood to the right, crystal chandeliers were suspended above both, but other than that, the raw concrete of the found space was to serve as the scenery.

An hour quickly passed in conversation. I learned how Dirk’s family had emigrated from the East to the West, how his mom immediately fled for the US, forcing his dad and him to move back to the East, how it had felt to have had the rug pulled out from under him when the two Germanys were unified, how he was barely eking out a living as an actor in television commercials.

Pretty much overwhelmed by all of this, all I remember lamely offering to Dirk in return was, “Look, that piano is Viennese and has extra keys at the bass end!” and “Did you learn to play a musical instrument as a youth?” 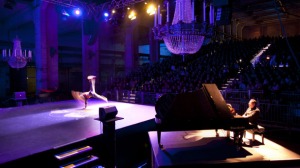 Suddenly the architectural lighting dimmed, a spotlight gripped the grand piano, Christoph Hagel began to play the C Major Prelude, and I began to strangely sense that, somehow, the entire audience was being called together into some kind of communal consciousness. Some of us were being transported back into our childhood, either hating those hours of piano practice or fondly remembering how we would wallow in the bass line, grooving on the sequence of dissonances resolving into consonances. Others of us were reliving personal hells as we could not force from our heads past images of untalented church sopranos singing Gounod’s “Ave Maria.” But I think that, for most of us, we were being transfigured by something fundamental that we knew to be, deep in our hearts, whoever we were, wherever we’d come from,

And then the spell was broken, and we were plunged headlong into a fugue. 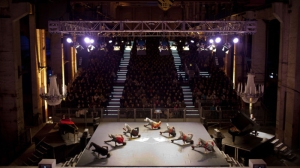 Motion. Lights. Performers. Patterns. Another prelude. (What’s this, a plot?) Competitions. Freezes. (How do they do that?) Another fugue, this time on the harpsichord. A roll of cloth becomes a projection surface. Distinct characters emerge. (Wow, that guy is STRONG!) Alternating preludes and fugues. Some portions of the music are now electronic beats. Micro-rhythms. Tiny gestures. (Oh my God, I think I am actually “seeing” a fugue!) Boy-girl conflicts. (She is so cute!) Hurt feelings. Promises. (Resolutions?) No, more projected images. Lights are flashing. Now all of the music is electronic. (I think my head is inside the world’s largest, loudest pipe organ.) It’s the Toccata and Fugue in D minor. (This is way better than Fantasia!)

And then it was over.

On to our feet. Applause. The crowd crushes towards the stairways. I say “so long” to Dirk, but there’s no time to hear what he thought of it. Back down the stairs. (No, I don’t want to buy a 50 Euro hoodie.) Through the gate. Back into the quiet side streets.

Flying Bach was one of the most exciting performances I’ve ever been to in my entire life. 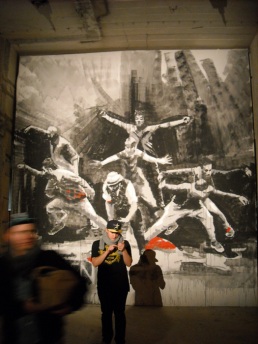 All tickets to the December performances of Flying Bach were sold out within minutes after going on sale in October.

Returning home after the first half of a European tour, the b-boy crew Flying Steps, holders of Battle of the Year and Red Bull Beat Battle trophies, are busting their moves to the first six pairs of preludes and fugues from Bach’s The Well-Tempered Clavier (BWV 846-851) and Toccata and Fugue in D minor (BWV 565) at trafo/Kraftwerk, a decommissioned power plant in the Mitte section of Berlin.

Noting that breaking need not be restricted to hip-hop music as long as basic musical conditions, including tempo and rhythmic patterns, are met, Christoph Hagel, the group’s artistic director and pianist, said, “We chose Bach’s The Well-Tempered Clavier over the works of other classical composers for three reasons. First, the fresh­ness of the music, which corresponds to the freshness of breakdancing. Second, the ability of breakdancers to dance short note-values, little motifs and clear structures. Third, the ability to give every dancer one voice of a fugue and to make the structure of a fugue visible.” 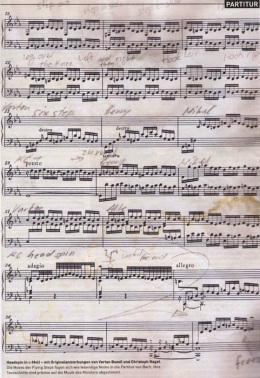 Hagel says there was no need to fundamentally alter the music to suit the urban dance form. “For the most part, we play Bach’s music on piano and harpsichord. Only a small portion of the music was transformed into electronic beats, mostly without changing the notes.” He stressed, though, that it was critical to add Yui Kawaguchi in the mix. “It was very important for us to include a contemporary dancer, in order to show the contrast between urban and contemporary dance.”

Flying Bach, which was featured earlier this year at the Eurovision Song Contest and the Bachfest Leipzig, continues its Berlin run through 30 December 2011.