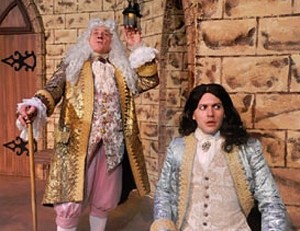 Jim Hunt and Anthony Bianco in Bach at Leipzig

Jim Hunt is one of the most respected, well-reviewed and best-loved actors in the Denver area. He has given memorable performances as a wheedling tramp in Harold Pinter’s The Caretaker; a foppish musician in Bach at Leipzig; the loving, baffled father of Eurydice, who has passed into the land of the dead in Sarah Ruhl’s beautiful play of the same name; and James Tyrone in Long Day’s Journey Into Night, for which he received a Best of Denver nod from Westword. [Earlier this week] at the Colorado Theater Guild’s Henry Awards, he was given an award for lifetime achievement in theater.

“It’s kind of fortuitous turning seventy and having this award happen,” he says. “I guess I would be lying if I didn’t say . . . It doesn’t feel ominous, but you think, This is very late in life when you get one of these. Should you be alarmed? And I’m still so busy. In the last thirty months I’ve been in thirteen shows. Five a year for the last couple of years, and every year in different venues. I love the opportunities I get. And at my age, I thank my lucky stars every day that my brain still holds words. That is the deal breaker. If you can’t remember lines, you don’t get to play any more.

“The award does feel like a milestone,” he continues. “I really have been doing theater in Colorado for a long time. I lived in Michigan for three years after college, but I came back here in the summers and was still part of the theater scene as an audience member. I moved back and performed at the old Gaslight, and saw there was good theater happening here: The Changing Scene, Theatre Under Glass.

“I went through my bout with stage fright in the mid- to late 1980s, and it was really Josh Hartwell (an actor, playwright and director) who got me back into theater in 2001 with a production of Never the Sinner at Theatre on Broadway. That was an annealing moment somehow. From then on, theater moved back into the center of my life,” Hunt says.

“The award is wonderful, and I’m going to keep working. I’m scheduled to do After the Revolution for Curious. Later in fall, I’ll be rehearsing The Woman in Black for Breckenridge. I would love to do Lady Bracknell in The Importance of Being Earnest someday, and I wouldn’t mind another shot at James Tyrone. I don’t have an ambition to do Shakespeare – King Lear, for instance – and I’m not sure why. There’s tons of it stuck in my head. It would terrify me and I think it’s probably just the legend and the poetry and not wanting to get a single word wrong,” he confesses.

“I’m not saying I would turn it down.”

The Colorado Theatre Guild is a non-profit devoted to supporting the theater community, and at the same time it provides the public with information, access and opportunities relating to live theater events across Colorado. For the Henry Awards – named after legendary Denver theater figure Henry Lowenstein – local critics and other members of the community vote on productions along the Front Range.